Oahu’s 2017 housing market finished strong with gains in both condominium and single-family home sales and median prices, and experts from the real estate industry expect the momentum to continue this year, but possibly at a slower pace. 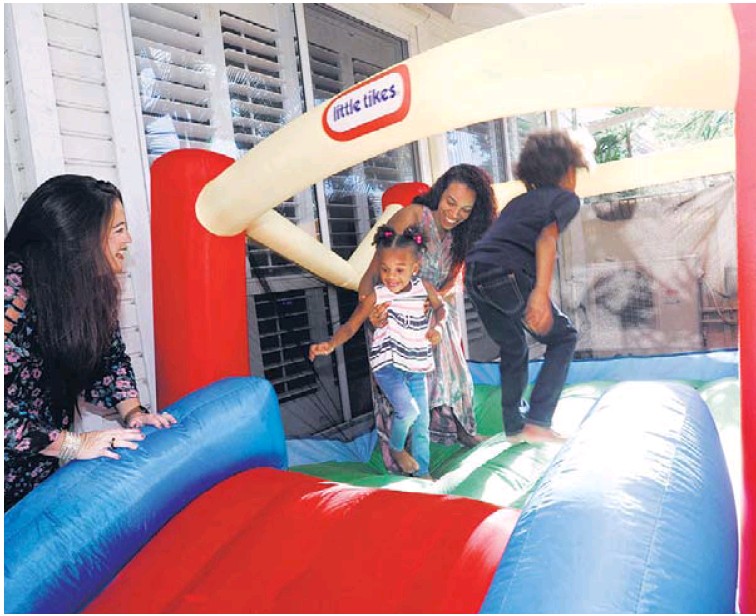 It was a brisk market in December, when Erika and Brandon LaFayette recently sold a two-bedroom home in Ewa Beach and traded up for a three-bedroom for their growing family. Erika, left, and her two children, Sebastian, 7, and Fiona, 3, looked through a basket of goodies that real estate agent Shannon Severance, right, of RE/MAX Honolulu brought them on Saturday to celebrate their success in finding their dream home in a frenzied market.

It was a brisk market in December, when the median time that it took to sell a single-family home was 20 days and 18 days for a condominium.

Air Force Staff Sgt. Brandon LaFayette and his wife, Erika, who bought twice and sold once since 2016, are proof that it’s been a frenetic market. A military family whose last duty station was in Okinawa, the LaFayettes were constrained by sticker shock and limited buying power when they bought their first Ewa Beach condominium in 2016, a two-bedroom, two-bath unit.

But a year and two months later, the property had appreciated enough that the couple was able to trade up to a three-bedroom, three-bathroom condominium to accommodate 7-year-old Sebastian and 3-year-old Fiona.

“We listed it in September and we made good money. We were able to do some upgrades in our new home and pay off a vehicle,” Erika LaFayette said.

Their real estate agent, Shannon Severance, who was Re/Max Honolulu’s Overall Top Producer in 2017, said the couple had four offers, two above asking price, within a week of their September listing and, despite some tough negotiating, were in their new home by Nov. 7.

“The LaFayettes are a classic example of this market,” Severance said. “There’s lots of strong buyer demand, especially on the west side where everything is newer, lots are larger and homes have central air conditioning. My phone has been ringing off the hook in 2018 and I think it will continue. Unemployment is low, people are feeling good about the economy, and interest rates are still near historic lows.”

John Riggins, the owner of John Riggins Real Estate, agrees Oahu’s real estate market will remain strong in 2018. However, he thinks December’s slowdown in condominium sales is indicative that the market may stabilize somewhat due to high prices, rising interest rates, and the possibility of negative implications from the new tax law, which limits mortgage interest write-offs to loans up to $750,000.

“Local buyers are still in the market, but it’s getting more and more difficult for them to buy,” Riggins said. Stephany Sofos, a commercial and residential real estate expert, maintains this year’s market will be more favorable to local buyers, who have had to contend with four years of foreign-investment-fueled frenzy.

“People have to understand that Hawaii real estate is now an international commodity. Locals aren’t just competing with the buyer from Hilo or Kailua. They are dealing with people

The number of houses and condos sold in December with the median price and percentage change from the same month last year:

You have Successfully Subscribed!

You need to log in to use member only features.